Going Right Was All Right, But it Made Me Question My Manliness

Well, after having a few too many Leinenkugels and Coronas, we decided we’d move to the other side of the cooler. We’ll eventually make our way back – and there’s some stuff called “Kinky” on the right side that makes my ovaries hurt just looking at it -but I’m starting to think the right side was a better place to start. We had a couple of pleasant surprises, and an old friend. Then again, we had to endure a strawberry beer that made my teeth hurt. More on that later.

I (James) decided that, based on an experience I had with a horribly flouncy cocktail recently, that I’d base this week’s reviews at least partially on the manliness of the beer. It’s important that your beverage do all the speaking for your masculinity, right?

In deference to Ingles (and in a shameless ploy to get sponsored,) we’re going to try to keep our cursing and awful jokes to a minimum, but keep in mind that we’re drinking and we miiiiight have tourettes. It’s mainly the alcohol talking. We’re normally pretty nice guys. 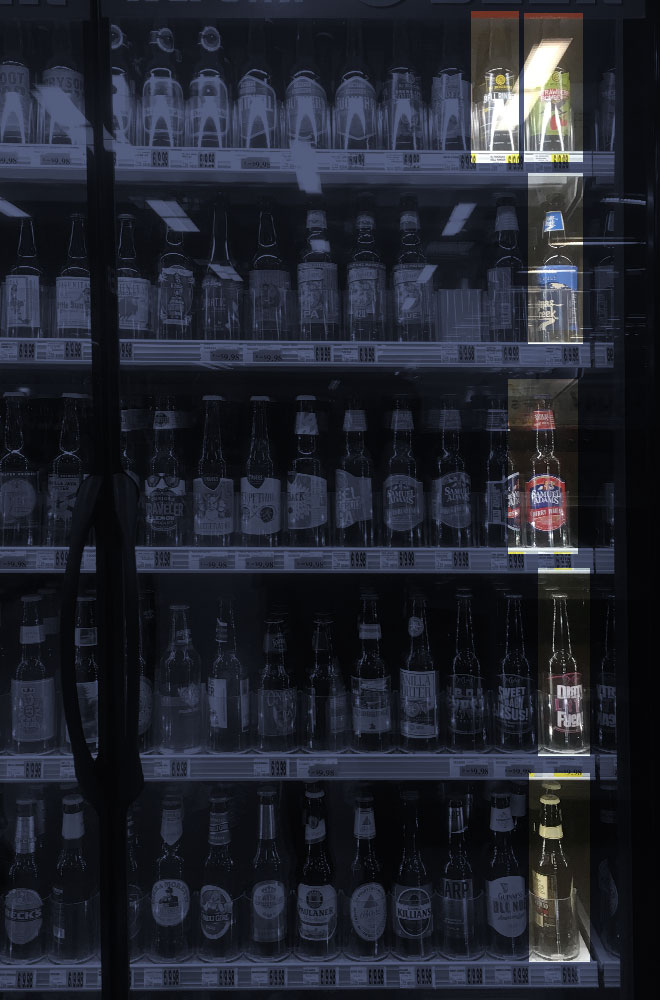 Son of a Peach

Tasted like I broke a tooth on a freezer burned strawberry. Nope. Not for me. Plus, waaaay too poofy. Where’s the bloody lager?!?!

It tastes like cheap beer mixed with strawberry stems and metal shavings. No thank you. Noooo thank you.

Oh, beer – you’re so unpredictable. Just as I’m ready to stop this crazy shenanigan, you come back at me with a beer so good that it makes me want to keep exploring.

I didn’t have a lot of hope for this, as it’s from – ugh – Greenville, but I was surprised. It’s a smooth, caramely, malty and slightly fruity (grapes was the first thing that came to mind/tongue) amber ale weighing in at a reasonably manly 6.8%ABV. Creamy finish, nicely carbonated. THIS is a beer for kicking back in the Barcalounger and watching the race. Made me instantly more manly. Neck label and logo are pretty cool – but the actual label is pretty lame. I swear – rock and roll type? Come on.

Faaaantastic. Absolutely fantastic. I really wasn’t expecting anything from such a bland looking bottle, but I’m in love. Creamy, caramelly, almost a little citrusy.. mmm. In a way, it reminds me a bit of an IPA mixed with a lighter stout, but that’s selling it short. It’s an absolutely fantastic beer, great for warm summer days. Highly, highly recommended. I just wish their label design did justice to the beer – and to their slick logo.

Like a 5.8%ABV Cherry Coke. I was expecting more of a cough syrup flavor from the smell, but it’s actually pretty tasty. I wouldn’t be able to stomach more than a couple – but this is a reasonably manly way to drink something that doesn’t taste like beer, but you don’t want people seeing you drinking a Zima. It’s sour, slightly beery, but not remarkable or entertaining enough to make me want a six. Packaging is meh as meh gets. If someone handed me one of these, I’d drink it – but I’m not going back for another.

This beer was a bit of a roller coaster ride. I was initially turned off by the smell – one whiff and I was instantly reminded of cherry flavored cough syrup, but with my first sip I was pleasantly surprised by the light, crisp cherry flavor mixing well with the light beer. I was really enjoying it for about half the bottle.. but..

After awhile it just started tasting like medicine. I’m not sure if this was due to me drinking it too quickly or what, but it wasn’t a very pleasant experience. Bleh. Maybe I need to sip it for longer. Or just drink a better beer.

According to their label, this 5.8%ABV brown ale is “A dominant blend of roasted malt, coconut, caramel, and chocolate flavors barely restrained by a gentle hop bite, that tantalizes your senses all the way through to a satisfying finish. Submit to indulgence, but be warned … there is no safe word!” and that I should “Respect the Fluid.” I refuse to drink this stuff again based solely on the branding. Are they marketing to pubescent teens? If you see a guy sporting a sixer of this, you have plausible reason to assume full douche. I mean, I’m a dude – but, I’ve not been 14 for a long, long, looooong time. Grow up. Drink real beer. Aside from the novelty of super-dark chocolate/espresso and odd coconut, this is simply a sub-par stout-ish beer. Shtick can’t overcome this beer’s shortcomings. Pass.

Wow! It’s gross beer in THE DOUCHIEST bottle I have ever seen in my life. I felt a Tapout shirt and polarized sunglasses materialize on my body as I sipped this hell-broth. It’s not the worst tasting thing I’ve ever had, but it’s by far the most offensive. It’s not funny, it’s not cute, it’s embarrassing. Nope.

There was a time in the early nineties when me and The Injun would wander to Barley’s Taproom and down a couple/few pitchers of Guinness (and one ill-fated pitcher of Spaten Optimator – but that’s a different story) every Friday and many Saturdays. Guinness has always been a favorite – as ubiquitous as it is, it’s just excellent stuff. I still prefer a legit draught Guinness, but this stuff is just straight up good. 6%ABV in the bottle, 4.2%ABV out of the tap – delicious either way. NOW – some folks don’t like Guinness. It’s a stout – dark, chocolatey with a bitterness to it. Manly. Hairy-chested. If that’s not your thing – don’t go for Guinness. Also, don’t talk to me.

Mmm. Guinness. We’ve all had it, we all (probably) like it, you know how it goes. Creamy, chocolatey, delicious. If for whatever reason you’ve never tried Guinness, check it out.

God, here we go again. Not girly enough to be a peach cocktail, not burly enough to be a beer with peach. Tastes like someone left a PBR out to get slightly flat, then dropped a peach gummy bear into the can, swizzled it around for a little while and then put it back in the fridge. Candy peach and cheap beer. I wouldn’t filter this stuff with YOUR liver. Pass.

Bummer. This was the beer I was most excited about trying from this week’s selections, and it really failed to deliver. It’s a fine beer, just not great. A light, watery wheat beer accented with flavors of peach and.. metal. I don’t know if we’ve just had bad luck with the RJ Rockers drinks, but both this and the Strawberry Bomber tasted like they were aged with metal shavings. Not really my thing. I definitely recommend this MUCH more than the Strawberry Bomber, but I’m not too sure I’ll be picking this one up again any time soon.

Get All the News

Tips, tricks, DIY, jokes and lots of complaining. Cancel any time. We never spam and your info is COMPLETELY confidential. Always.